It is 1943 and Jan  wants to go to England to join the RAF. His oldest brother Gérard, is 1st flight Luitenant in Asia, fighting the Japanese in Glenn Martins. Jan does not know yet that Gérard was shot down in  Tarakan in January 1942. His dream is to fight the Nazis from the skies, and he is planning to run off to England. How did Jan spend those months preparing for his flight to Belgium? Luckily we have some of his diaries and oral family history to rely on.

As we now know from an earlier post, Jan was being forced to work in the Dutch Labour Service (NAD), a Nazi organisation directed at preparing Dutchmen for forced labour in Germany or on the Eastern front. On Friday the 27th of August Jan ended his work week at farmer Wieringa’s place in Diever. He was posted there with his team from the Dutch Labour Service camp Geeuwenbrug. They had helped with the potato harvest and were ready to return home for a weekend. He bought 12 pounds of dried beans from Wieringa at 2.50 Dutch guilders for a pound. And later at Farmer Westerhof – where he spent much of his free time – he bought 15 pounds of Rye for 0.15 guilders per pound. And so he was ready for a short visit home in Haarlem, laden with food for his mother. Food that was scarce in the city.

On Saturday the 28th of August the police held one of their harassing searches in the family home in Haarlem, but luckily that went well and they did not stay long. My grandmother had a threadbare apron and very worn, dirty headscarf hanging on a peg next to the front door. When the ‘Moffen’, as the Nazis were known in the Netherlands, came knocking she donned her old apron and headscarf and opened the door looking very discouragingly at the police.

They sometimes came to look for copper items, needed for the arms industry or radios. But usually they came to look for her sons. A rehearsed scene sprang into action when the Nazis came knocking. As my grandmother walked towards her apron one – or more – of her sons would hide in a secret place in the attic, the bed would be moved to hide the spot and her daughter-in-law would jump into bed and look as weak and ill as she could. Beside the bed were the pills and thermometer to perfect the scene. And my grandmother would start to speak German in a croaky voice saying “Ich habe dreizehn Kinder!” (I have thirteen children) and describe in detail the illnesses in the house  which were terribly contagious. This usually worked, and the search was broken off. 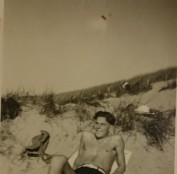 Ton and Theo increase and at the end of the year he spends a lot of time alone with Theo. They have long discussions about the education of the youth and the value and authenticity of religion – especially Roman Catholicism and about the tyranny of the ‘moffen’. They are also in love with two sisters, which strengthens their bond.

On Thursday the 14th of October all of the staff members at camp Geeuwenbrug were called up individually to speak with the Commander. After having worked for the NAD for six months Jan became a foreman at the camp and was therefore part of the camp staff. They had been ‘requested’ by the Nazi authorities to introduce the Hitler Salute into the camp. He writes:

“Wednesday 13 th October management meeting about the famous salute. Six wanted to do it, 28 did not. That was more than I had expected  and there seems to be something more to the Dutch Labour Force than meets the eye.”

So on the 14th all 26 of them are all called up individually to speak with the camp Commander. Every one of them still refused the salute. The consequence was that a request was made to have all 26 fired.

In October Jan is eagerly following any news he can get about the progress of the war against Germany. ‘Portugal has allowed England to use the Azores during the war’ he writes. On the 16th  of October he describes that he has been to Farmer Westerhof and heard the news: ”there has been a large air fight above Bavaria. According to Germany 125 American bombers have been shot down”.  This was the second raid on Schweinfurt on October 14th targeted on factories making ball-bearings for the war industry. Little did he know that in less than a year he himself would be in Bavaria.

On Thursday the 21st of  October Jan travels home again with brown beans, rye flour and bread. That weekend the distant rumble of a naval fight can be heard. On Saturday he goes to a piano recital by George van Renesse in the Theater of Haarlem together with his brother F., sister in law B. and little sister I. That Sunday he spends with the family and  then goes to the dunes 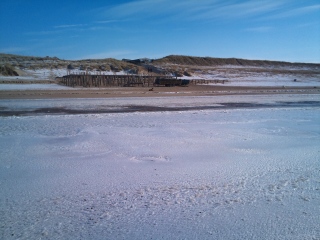 with Theo at  Kraantje Lek, a  famous café in Bloemendaal which still exists. While they are there 15 Bombers and 30 British fighter planes pass overhead but German anti-aircraft fire forces them to retreat.

On the 29th of October he hears that he will be honourably discharged. He immediately writes to Theo. He is afraid that the police are after him. On 4 November he goes to a photo studio and orders a photograph for his family – clearly already making plans to leave. On the 11th of November he sleeps in a different place in Diever as he expects a  police search. He then works for a time – in hiding – in the North-East polder and describes meetings with other members of the staff who have been fired.

At the end of November there are fierce raids on Berlin for several days. On the 26th of November Jan writes, with empathy that has probably been instilled in him by his mother: “All day Tommies up above, endless. Very high. There will be a lot of suffering in Germany“.

On Christmas 1943 he goes to the night mass with Theo and writes: “hopefully the last war-Christmas”. His next, and last Christmas, would be spent singing songs in a jail cell in Bavaria.

He spends the next few days with Theo, probably preparing their flight. On the 29th of December he was home: “Heavy shooting by Tommies so that the small ones came downstairs scared”. The small ones are his three smallest sisters I., J. (my mother) and L.

On the last day of 1943 Theo and Jan have a meeting with a certain J.M. – the mastermind of their planned escape to England via Normandy. At the beginning of January Jan writes that the newspapers are filled with the threat of Allied invasion and the German secret retaliation weapon. ‘The might of the Russians is crushing’ he writes.

And thus, believing victory was near at hand and that he had a part to play in the war, he leaves a farewell note for his mother to find, meets up once again with Theo and together they take the train to an adventure from which he would never return.

10 thoughts on “Off to England and the great unknown”