THIS POST WILL BE REWRITTEN. FURTHER RESEARCH HAS PROVED THAT THE ARREST  OF JAN VAN BOECKEL TOOK PLACE DIFFERENTLY

Jan was arrested at the “Moulin de Rahimont” the water mill in Bértogne. The circumstances of his arrest are somewhat diffuse. Combining information from witness accounts and oral history I have come to the following description:

The mill inhabitants were ambushed. The miller, Monsieur Joseph Perrad was involved in clandestine activities. A WWI veteran he aided the local maquis (resistance) in WWII.  In addition to harbouring a number of illegal foreigners, and aviators,  he  housed escapees from the forced labour service, including his future son-in-law Mr. Schieres. 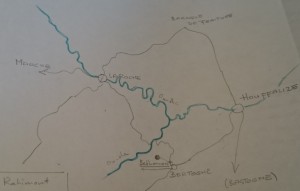 The maquisards (resistance fighters) hid caches of arms, including dynamite from the Soviet Union, at the mill and used it as a hideaway. This group consisted of Belgians, Frenchmen, Dutchmen, Russians and an Algerian.

One night, around three in the morning, the mill inhabitants woke up to a lot of noise. A forty-strong German police contingent encircled the mill. They hunted everyone down and gathered them outside the mill. Trying to gain information on the whereabouts of other maquis, everyone found was mistreated and the miller was brutalized. As no one talked the maquisards who slept in the stable were able to escape. In retribution the police wreaked havoc inside the mill and destroyed the wheel of the watermill.

According to the millers’ grandson, Jaques Diez,  a traitor had awakened the Nazis to the fact that the maquis were at the mill. He suspected his aunt Anne to be the culprit. 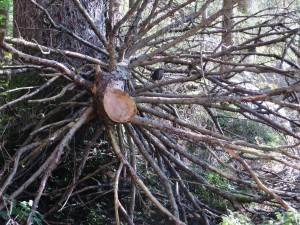 It was the 30th of May 1944. Jan, and five other members of his international maquis group, were arrested along with the Joseph Perrad the miller and the miller’s future son-in-law. Four members of Jan’s group escaped. The prisoners were taken to the Saint-Leonard prison in Liege. At least some of them were transferred to the Liege Citadelle on the 6th of June,  and were later on deported to Germany.

I know for sure that three people of this group of arrestees came back alive from the camps, including Victor Meunier (nickname Milou) and Jaques Perrad. And I also know for sure that two of them died. Raymond Damart (nickname TinTin) died at Buchenwald and Jan died between Saal and Dachau, both of them in April 1945, just before liberty came.

Shortly I hope to learn more about the circumstances of the arrest….will be continued…..

Lots of thanks to Bruce at wwii-netherlands-escape-lines.com and Edouard at evasioncomete.org for their help in my search.

8 thoughts on “Arrested at the Mill of Rahimont”