Music is a theme in Jan van Boeckel’s life. Like a soundtrack it accompanies him on his journey.  From Jazz musicians in Oisterwijk he makes his way to Gregorian choirs and singing field hands in Dutch and Belgian Limburg to Christmas carols and camp-fire songs in Germany. Until he reaches the final stages in Bavaria. There the music abruptly stops. This post focusses on his time in Dutch Limburg.

Sleeping in the attic in an old bed which was so saggy that they slept across it at an angle, they were unclear on how to progress. Back up north, in Heemstede, near Haarlem, a friend seems to have been the mastermind of their travel plans to England. He knew how they could cross the border to France and onwards. But they needed to contact him to get the details. Theo was just 18, small for his age, and in his own eyes made a fine woman. Wearing a dress and lipstick, and probably with a false pass in his handbag, he made his way back up north by train. Jaap Middeldorp, a friend, explained that they should make their way to the city of Maastricht in the southern tip of the Netherlands. At an agreed upon date and time they would meet Jaap at the station and he would see to it that they could take the train to Normandy. His plan was to take a train run by the Organisation Todt (OT), the SS military engineering company. OT was transporting (forced) labourers to Normandy to help build bunkers for the Atlantic wall, the Nazi plan for coastal defence and fortifications. Jan and Theo, and presumably Jaap, would escape from the OT in Normandy and run off via Spain and Portugal to England. That was the grand plan, and Jaap was the master planner.

This, and many more episodes of the Quest for Jan van Boeckel will be told in a historical novel.

This is the last post for this year. As I look back to where this quest has taken me these past few months I am filled with joy. I got more than I bargained for. The quest has taken me deep into the life of Jan and others he met on his journey.

With gratitude I look back at all the support I got, in the first place Aunty I. and Uncle P., and of course C., but also Theo, Anne Autin, Robert Meunier, archivists, librarians, researchers, supporters and more. I was also able to write this last post thanks to the help and interest of many people who made it possible to visit the area. 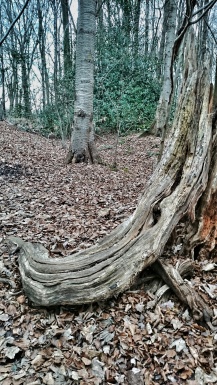 A big thank you goes to the people who invited us, complete strangers, into their homes, as they did with Jan 70 years ago. The Géron family in Mechelen, the Géron family in Aubel, and last but not least Mr. and Mrs Deckers who were able to paint us a picture of what life was like in Mechelen during the war. A special thanks to Michel Spons who offered up his Sunday to accompany us on our wild goose chase, both in Mechelen and Aubel. And to Cousin M. for the idea to visit Limburg and her perseverance (=van Boeckel). Last, but not least, the delightful H. for moral support. Life is rich.

I do not know where this quest will take me in the new year. I feel that I have done my uncle justice by accompanying him on his journey through light and shadow, retelling his tale as it unfolded. In my imagination he was always a man, but he has turned more and more into the young boy he was. There are a few episodes that I would like to add, the journey to Liege, for example, the time spent with the Maquis,  the evacuation from Saal and some more missing pieces. What form this will take I do not know. We will see what the new year brings. At the end it is my ambition to rewrite all the posts into a complete story. Now I am however exhausted as I have poured all my inspiration, creativity and academic powers into the quest. I am taking a break for the rest of the year. Wishing you all merry days and a wonderful New Year.

13 thoughts on “Dames, Chaplains and Smugglers”