It can get hot in Frankfurt. It can get so hot that the heat wraps around  you like a blanket. City folk seek reprieve from this onslaught in parks and streets. And luckily, there are a lot of distractions out in the open. In summer the city becomes one big open-air spectacle. Starting with the Lichterfest in the Palmengarten and ending with the largest cultural event in Germany: the Museumsuferfest. In between there are a multitude of bigger and smaller streetfests and open-air cinemas, theaters and concerts.

e ‘streetfests’ are  ‘wine-drinking, bier-drinking, wurst- and lots of other meat-eating,  -been to one you’ve seen them all- events’. But there are many alternatives. The Lichterfest in the Palmengarten, which I describe here, heralds the summer festivities. Millions of tea lights spread out over the lawns glittering amid the luscious plant-growth are quite a sight to behold.

Open-air cinemas sprout up around town as soon as the month of June is well established.  The Freiluftkino Frankfurt right in the center of the city and the free open air cinema on the green hill at the Städel museum being just a couple of examples. Unique is the ‘Haus am Dom‘ near the Römer square. On a small terrace you can watch an art-house film on a small screen, while the rooftops spread out around you.

In the Günthersburgpark there are free concerts.  I once cycled
through the park during a concert and was immediately flung back into a time warp. There was a mini woodstock playing out before my eyes with sixties music and people of all generations spread out all over the grass.

The other large park north of the river Main, the Grüneburgpark, is a large expanse of green directly adjacent to the Palmengarten

and the Botanical garden. There are always scatterings of people hanging out in groups, twos, threes or on their own. Enjoying the sun, the green and the gentle silence. And in the summer there is  the Freilichtfestival where the Dramatische Buhne performs classical theater in their own merry way. 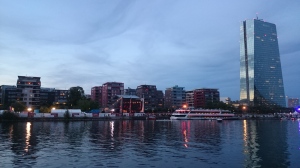 With the river Main and the  ECB towers as backdrop  the  HR Sinfonie Orchester classical open air concert takes place at the end of July. Bring along a pick-nick and find a spot on the southern bank and you can bask in beautiful music.

The ‘Sahnehäubchen’ (literally cream topping, ‘but means cherry on the cake’) has to be the Museumuferfest which wraps up the summer season. One big open air party with culture as a central theme. Indonesia was guest of honour this year, as the country will also be put in the spotlight at the Frankfurter Buchmesse. All the musea participate with special events. Along the riverbanks DJs mix, dancers stamp, musicians strum, singers sing. Artists and artisans from all over Germany,including Berlin, sell their ware at the seemingly endless artisan market. I 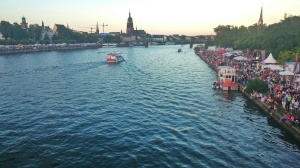 ended up going to a German poetry slam and although I only understood 80% of what was said it was a treat. Although you do get your run-of-the-mill wurst and bier, there are even more food stalls selling food from a broad spectrum of countries such as  Indonesia, Vietnam, India, Korea, Kenya, England and there is even a taste of Vegan.

This is just the tip of the Frankfurt  open-air event ice-burg. Now that I know what to expect, I’m already anticipating next summer in Frankfurt.