A bird’s-eye view of down town Amsterdam –  once only a dream, now temporarily possible. An extension has been added to the oldest building of Amsterdam, the Oude Kerk (Old Church). It has been adorned with a transitory platform

high in the sky.  Placing scaffolding against the north-eastern wall of the church, artist Taturo Atzu constructed scary steps that lead up to a spacey white observation platform. This platform stretches between the church weather vane, bell tower and the steeple. By doing so he has given us the opportunity to see both the church and the rest of Amsterdam from a totally different perspective.

It is a unique experience to look down onto the centr

al canal of Amsterdam, the Oudezijdsvoorburgwal, from way up high. Into the windows of the red light district and the bell gables of the canal houses. I used to live at the top-end of the canal and it is a delight to see my old place from the perspective of a seagull. Just as seagulls perching along the slated roof of the church have been observing the city for centuries, watching as Amsterdam cha 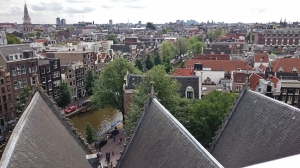 nges but always remains the same.  Sometimes changing a bit more  – for a moment, only to nestle down back into its status quo. The platform will be there up to the 6th of September 2015, and will then fade from memory leaving the seagulls to  their vigil.

7 thoughts on “Downtown Amsterdam as you have never seen it”