After Dachau in Germany,  Salzburg in Austria was the next stop on my quest. According to my family there was a monument in this city dedicated to the missing people of the Second World War, including my uncle Jan van Boeckel. But the mystery could not be solved. Not only was my uncle a missing person,  the monument was also unfindable… My resolve deepened, and so Flossenbürg concentration camp became the next goal.

Driving from Berchtesgaden in southernmost Bavaria up towards Flossenbürg near the Czech border, we came across a number of memorials to the victims of the death marches. This evacuation of prisoners started out from a large number of concentration camps including Flossenbürg in 1945. We stopped at these sites to pay our respects. Increasingly we were struck by the utter senselessness of these ‘Todesmärsche’. Prisoners received no food and sometimes were walked around without a clear goal, many starved or got shot along the way.

The Flossenbürg concentration camp itself is now a monument, although a few decennia back it was partly used as an industrial site. Along the perimeter there are homes of citizens on a terraced hill, which was part of the camp. They look out over the vast open space where the prisoners were housed. The SS-offices and SS-casino building are still there, as are the kitchen, shower buildings and crematorium. Most of the space is covered by rectangles marking the position of the former prisoner barracks. And at the end, near the crematorium, there are many, many graves commemorating the dead.

Flossenbürg is off the tourist trail and thus not as busy as Dachau which is surprisingly well visited by all nationalities – including people who take selfies outside the crematorium. The expositions at Flossenbürg are very well presented, accessible, full of respect and offer comprehensive insights. This includes the economic aspects of the concentration camp, with registers of all the businesses that made deals with the SS – either to deliver supplies or hire prisoners. The Flossenburg memorial organisation has rightly been awarded the Bavarian museum prize.

Part of the exposition is placed in a building near the former shower rooms. Here there are personal stories of the prisoners either on video, or illustrated with images of people or artefacts. An explanation of the various groups of prisoners is presented, including political, Jewish, Sinti and Roma and homosexuals. Posters describe the stories of the nationalities that were brought to the camp. There are biographical stories in the bookcase. 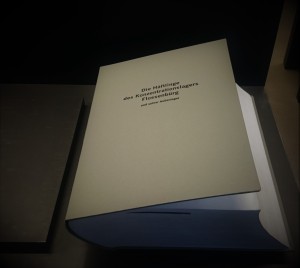 sing this part of this incredibly well made exposition, I came across a very thick book which held all the names of everyone who was ever imprisoned at Flossenbürg KZ. With something akin to fear I opened it and searched for the B….And yes there he was:

My heart stopped and I had to look, not twice, but three times. Yes, he had been here. I than had no choice but to speak to someone from the monument administration to seek more details. What I found was more than I could imagine. But I will tell more in the next post. In the meantime I am working my way through testimonials and writing letters to archives searching for even more answers.

19 thoughts on “The book of names at Flossenbürg”